Restored Newtown school before full landing was added in the front.
"Find a fit" in one of the old desks that fill the one-room school.
Check out the water cooler and lunch pails used by students back in earlier days.
Imagine the heat produced by burning coal and/or wood. 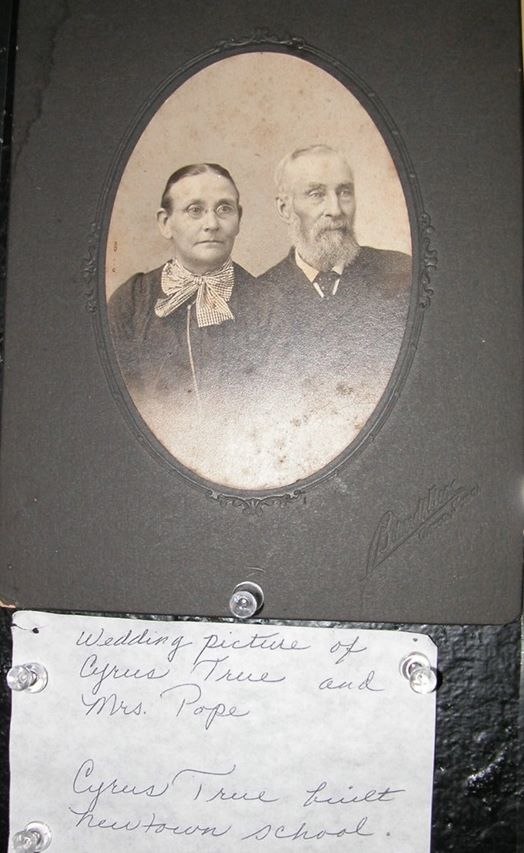 "Meet" Cyrus True who receives credit for building the first Newtown school in 1858.

The old Newtown School House (Knox No. 1) rests quietly at the north end of Avoca's Edgington Park on old Highway 83 as a last reminder of the once thriving settlement of Newtown which was located two miles south and a little east of Avoca.

It seems that in 1855 a man named Buck Townsend had been instrumental in laying out a settlement named Wooster in Section 21 of Knox Township.  Then John Krutzinger bought 40 acres across the road and laid it out, naming the new site Newtown.

Cyrus True had arrived in the community in 1857.  He saw the immediate need for a school house, so he built the first frame school house in 1858.  The school was in use until the school year 1956-57 after which it closed.  It had remained open for a total of 99 years.

Rather than having it demolished, Mervin & Noyon Schaaf purchased the school building at a December 1967 auction for $135.  They later presented the building to the Newtown-Avoca Historical Society.  The building was moved to Edgington Park April 23, 1971 by Mr. Art Arkfeld of Panama, Iowa for a cost of $400, which included 75 cement blocks and fixing the windows.

Visits to the Newtown School can be arranged through the Newtown-Avoca Historical Society.